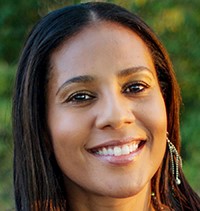 “I attribute my success to having found myself at HACC and having received the support I needed as a new student and a newcomer to the country.”

Hagir Elsheikh obtained her associate degree in electrical engineering from Sudan University of Science and Technology before beginning her journey at HACC. In 2001, she enrolled in HACC's Nursing Program. She shared, "I attribute my success to having found myself at HACC, and having received the support I needed as a new student and a newcomer to the country." The closeness to home and flexibility of evening and weekend classes allowed her to work while completing her degree.

After transitioning to Grand Canyon University to obtain her bachelor’s degree, she returned to HACC as an adjunct faculty member. This allowed her to give back through teaching nursing learners at clinical sites.

Building on her educational foundation and professional experience, Hagir started HSE Staffing Agency LLC in 2013. HSE Staffing is one of the fastest-growing and leading staffing agencies in Central Pennsylvania, earning Harrisburg Magazine's 2017 and 2018 Simply the Best distinction for staffing services.

Hagir gives back to her community through her activism with YWCA of Greater Harrisburg and the Capital Area Coalition on Homelessness. She also founded Tomorrow's Smiles Inc., a nonprofit organization that combats domestic violence through increasing awareness, education and motivational speech. She talks about these and other important issues on her YouTube show, The Hagir Show, and as co-host for the T.S.O. (Teens Speak Out) radio talk show. She also serves as a domestic violence counselor in Cumberland County, volunteers with Meals on Wheels, and teaches CPR, First Aid and AED with the American Red Cross.

In 2017, Hagir’s work earned her Central Penn Parent’s Health Administration Hero Award, and she was named among Central Penn Business Journal’s Women of Influence. Also, Hagir’s fascinating journey from a small village in Sudan to her current successes was the subject of an article in The Burg Magazine.

Hagir gives back to HACC as a member of HACC’s Board of Trustees. In 2019, she was honored with HACC’s highest alumni distinction - the HACC Distinguished Alumni Award. This award salutes the achievements of outstanding alumni who exemplify the HACC "spirit" with their personal lives, professional achievements and community service, and serve as an inspiration to other alumni and current learners. Hagir was also inducted into the Grand Canyon University Hall of Fame.