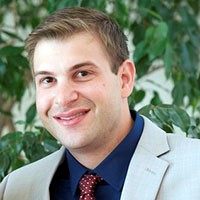 “As a HACC student, I was able to work while taking classes to earn my degree as well as the capital to start my business."

Entrepreneur Dan Thau wasn’t sure about his career path when he started at HACC in 2002, though the dream of launching his own business was always in the back of his mind. He began with general studies before moving into business courses and then switching to engineering. He credits HACC’s flexibility with helping him to determine his focus.

While taking engineering classes at HACC, Dan was intrigued by technology, determining that circuit board technology would be an ideal field in which to start a business, and he proceeded to plan for the future. A Harrisburg native, Dan was also committed to building a business in Harrisburg so that the region could benefit, and he saved his money by working part-time as a bartender. Again, HACC’s flexibility was key. “As a HACC student, I was able to work while taking classes to earn my degree as well as the capital to start my business.”

In 2005, Dan launched his company, Millennium Circuits Limited (MCL), from his basement. MCL is now an industry-leading, high-volume printed circuit board manufacturer based in Harrisburg that grew to a multi-million dollar company with offices in Harrisburg, Hong Kong and Shenzhen City, China. In 2012, MCL was named one of the fastest-growing companies in Central Pennsylvania. Then, in 2015, MCL opened a new, modern facility in the heart of Central Pennsylvania. MCL prides itself on its 98-percent customer satisfaction rate and 99-percent on-time delivery performance.

Despite his busy schedule, Dan finds time to give back to HACC. He frequently speaks to students about career opportunities and how to run a business. Dan says he valued his experience at HACC, and he is happy to help serve as an example of the success students can experience once they leave HACC and move into their chosen careers. In 2014, Dan was recognized by HACC with the Distinguished Alumni Award.

HACC is proud of alumni like Dan and grateful for his support of our students.