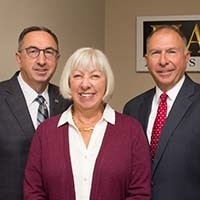 “So many lives are touched by those who were trained at HACC.”

HACC has been a part of the Enders family for nearly 50 years. The College launched each of the siblings, as well as their children, on a trajectory to achieve - and exceed - their educational goals. Their journeys describe these HACC-inspired successes:

Like so many others who have experienced HACC first-hand, the Enders family views HACC and its outstanding faculty as an invaluable resource in the region. Linda Dolan describes the school as “truly a gem in the community.” Don Enders continues, “I am excited to promote HACC and always tell high school students and parents to consider HACC as a high-quality, low-cost educational option.” He takes great pride in every HACC graduate who has touched lives in the region, especially when discovering that a nurse or other professional attended HACC. “So many lives are touched by those who were trained at HACC.”

Linda, Don and Jim also shared their thoughts on the quality of HACC’s student body. Jim, who has worked extensively with student volunteers, explained, “They understand the meaning of professionalism, and it’s clear that they learn this from the institution.”