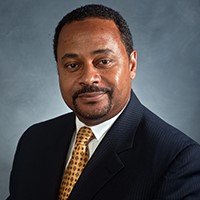 “HACC provided a great education at a very reasonable cost.”

Prior to his retirement, Brian Hudson lead the Pennsylvania Housing Finance Agency (PHFA) as executive director and CEO. Under his leadership, the PHFA became the commonwealth’s leading provider of capital for affordable homes and apartments and is one of the largest housing agencies in America.

Brian’s ascension to leadership at PHFA was well deserved – he worked at the agency for over four decades. He began his PHFA career as a staff accountant in 1975. Since then, he has held progressively more responsible posts until he took over the PHFA reins as its chief executive in 2003. In addition to his HACC degree, Brian holds a bachelor's degree from Penn State University and Certified Public Accountant and Certified Treasury Professional designations.

“HACC provided a great education at a very reasonable cost. I was an accounting major, and the advice and encouragement I received from Mike Furjanic, my professor, and Mr. Ritchey, my counselor, inspired me to become a certified public accountant,” said Brian.

Brian has also served his community. He is a former chair of the Harrisburg Public Schools Foundation and a member of the Impact Harrisburg board of directors. During HACC’s 50th anniversary celebration in 2014, PHFA was a sponsor and provided support for several events during the year, including Dr. Ski’s Miles of Gratitude, the Frank Dixon Tournament for Scholarships at HACC and the Golden Anniversary Gala.

In 2015, Brian was honored with HACC's Distinguished Alumni Award, which salutes the achievements of outstanding alumni who exemplify the HACC "spirit" with their personal lives, professional achievements and community service. In 2017, he was recognized as one of Talk Magazine’s “100 Most Influential African Americans in Pennsylvania.”