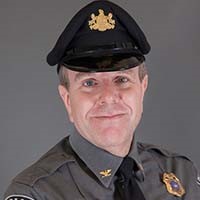 “HACC prepared me for a memorable career in law enforcement. I was able to form a close bond with the faculty and students at the Lancaster Campus that continues today.”

John Bowman is a role model for today’s HACC students as an outstanding leader within his profession, a mentor and a community servant. His successful career is filled with awards, including Officer of the Year and the Police Commendation Award. After graduating from HACC’s Police Academy in 1988, he was a patrol officer for the Lancaster Police Department.

John is committed to providing a safer environment for our HACC campuses. In 2012, he played a significant role in establishing annual active threat training exercises for the College’s Department of Safety and Security. He enabled an East Lampeter Township Police Department detective, who specializes in retail security, to train HACC’s bookstore staff collegewide. Also, John works with a HACC criminal justice instructor to provide tours of the police station and is a willing resource for students.

John has been a coach with the Conestoga Valley Youth Football program, served as a DARE officer who teaches drug and alcohol resistance to middle school students in the Conestoga Valley School District and is an associate member of the Bareville, Leola, Leacock Lions Club.