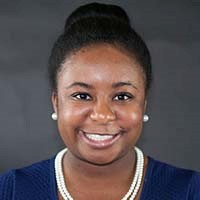 “HACC’s professors and staff are deeply invested in the culture of student learning. I would not exchange or give away the values and lessons I learned here at HACC. HACC is a beacon of light in Harrisburg, and all students should deeply consider letting HACC be their first choice for a quality and accessible higher education opportunity."

Destini has distinguished herself at a young age through her dedication and community involvement to the City of Harrisburg. She is not afraid to stand up for what she believes in. As a senior class president of Harrisburg’s Sci-Tech High School, she led a peaceful protest against the school’s lunches. After a week-long battle, students were able to significantly improve the food options at the school. After graduating in 2008, Destini studied for two years at Clarion University before transferring to HACC because of financial hardship. Back in Harrisburg, she decided to run for the Harrisburg School District Board. Despite legal challenges about her age, Destini was elected as the youngest member of the Harrisburg School District Board at the age of 21 in December 2011.

After pursuing paralegal studies at HACC, Destini transferred to Penn State University for a bachelor’s degree in political science, then pursued her master’s degree in community and regional planning at Temple University while working full time as an administrative office technician in security communications at HACC. She won the May primary to be the Democratic candidate to fill a two-year term in the Harrisburg City Council in the November 2015 election.