“Don't underestimate the value of education through a community college.” 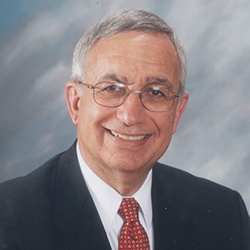 After graduating from Central Dauphin High School, Daniel attended HACC because it was close to home and provided the curriculum to support his pharmaceutical career goals at a reasonable cost. He found that “The quality of the education exceeded all expectations. Looking back over my career, if I were asked to name the five best professors, three of these individuals taught at HACC. I'm convinced that faculty at HACC had a passion for teaching versus research. The chemistry, biology, physics and public speaking curricular content was exceptional and provided a solid foundation as I continued my education.”

Daniel graduated from HACC in 1968 and believes that “HACC provided an exceptional foundation following my graduation from high school and my desire to pursue additional education.” He went on to obtain his bachelor’s and master’s degrees from Wayne State University College of Pharmacy. He continued pharmacy practice within the Detroit Medical Center until 1991 and finished his career there as director of pharmacy at Harper Hospital. From 1991 through 1999, Daniel served as the director of pharmacy for Methodist Hospitals of Memphis with 14 hospitals in Tennessee, Mississippi and Arkansas. In 1999, he moved to Baltimore to join The Johns Hopkins Health System, where he is responsible for inpatient, outpatient and home-infusion pharmacy operations under his charge as vice president and chief pharmacy officer.

Daniel received various accolades throughout his career, including HACC’s Distinguished Alumni Award, Wayne State University’s Distinguished Alumni Award and the University of Maryland’s Honorary Alumnus Award. In 2011, he was presented with the Maryland Society of Health-System Pharmacy W. Arthur Purdum Award and the American Society of Hospital Pharmacists’ Harvey A.K. Whitney Lecture Award – both are the highest awards bestowed by these societies. He has also been recognized for his presentations, publications and leadership.

If Daniel had one piece of advice for an individual trying to choose a college, it would be “Don't underestimate the value of education through a community college. I'm confident that time will demonstrate that the value isn't just the reasonable cost per credit hour but the quality of education you receive from faculty that have a passion for teaching.”