“HACC is a crucial part of allowing students like me to pursue their dreams. I would have never gone on to become a physician if I hadn't had the opportunity to start my education at HACC. I had been out of high school for over 10 years, and with working fulltime and raising a family, I never would have had the courage or ability to attend a four-year college. HACC makes education affordable.” 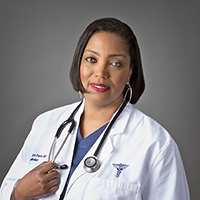 Dr. Morris-Priester is a HACC alumna who personifies perseverance.

Growing up in the projects of Harrisburg, Morris-Priester remembers watching in awe as doctors cared for her ailing grandmother. In that moment, she decided she would someday join their ranks. At age 16, she became a first-time mom but remained in school to graduate from high school. As a young mother, she needed to put her dreams of medical school on hold. This was a devastating blow to her family members. They expected Morris-Priester to become the first member of their family to graduate from college.

She did not stop there. She quietly applied to four medical schools and was quickly accepted to three. Morris-Priester became the first grandmother to graduate from Yale Medical School in 2007 and has been recognized by Oprah Winfrey for her perseverance, inspiration and compassion to others. In 2007, Dr. Morris-Priester was honored with the HACC Circle of Distinction, a prestigious award that recognizes alumni whose professional pursuits demonstrate the quality of education and values from their time at HACC.

Dr. Morris-Priester practices anesthesiology in Allentown, Pennsylvania, and gives back by mentoring students interested in healthcare fields and organizing a medical mission to Ghana. She also gives back to HACC by sharing her story to encourage and inspire others: