“HACC's open-door policy gave me the chance to prove myself.” 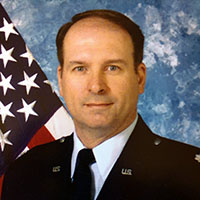 Harvey ‘Harv’ Lyter chose to start college close to home by attending HACC. He said, “HACC's open-door policy gave me the chance to prove myself,” and noted that the convenient class schedule allowed him to work part-time while attending classes.

Looking back on his decision to choose HACC, Harv would advise someone choosing a college to start simply: “Perhaps even one class at a time until you feel you have a handle on the academic challenge. For most people, college is a huge step away from public school, and few public high school programs adequately prepare you for the rigors of a serious college academic environment. Stay as close to home as you can to maintain your support network, at least for the first year or so.”

He continued his education by completing three programs of professional military education in international relations and systems management and obtaining his master’s degree in business administration from Golden Gate University. This foundation led to a career of over 26 years with the U.S. Air Force. He served as a fighter aviator, program manager for electronic warfare systems test and evaluation (at the U.S. Air Force Head Quarters at the Pentagon) and wing/installation inspector general (at Mountain Home Air Force Base in Idaho).

After retiring as a lieutenant colonel in 2000, Harv worked for the Office of the Idaho State Board of Education for 14 years as an operations and performance officer and later as director of state agency providing services to students with hearing or visual impairment statewide.

In addition to his service to his state and country, Harv gives back to his community as a volunteer for the Warhawk Air Museum in Nampa, Idaho. The Bridging the Generations program hosts large groups of secondary and high school students for tours and discussion groups.