From July 14-25, 2014, HACC joined the nation with the hidden cash fad, but instead of giving away cash, the College gave away something better! Thanks to the  HACC Foundation, the College conducted HACC's Treasure Hunt for Tuition Giveaways. HACC hid 10 $1,000 tuition giveaways in its 10-county service area for any member of the community to find. The 10 counties were Adams, Cumberland, Dauphin, Franklin, Juniata, Lancaster, Lebanon, Perry, Schuylkill and York.

To kick off HACC's Treasure Hunt for Tuition Giveaways each day, the College shared a clue around 8 a.m. on its collegewide Facebook page and Twitter (@HACC_info) account. Clues were shared until the treasure was found.

Today, 10 individuals are smiling, because they followed the steps and claimed one of the 10 HACC treasures. The recipients of the tuition giveaways were thrilled to find the treasures. Some of the recipients are current students of the College, while others are joining HACC for the first time. Many of HACC's students must pay for their own tuition, and they have additional support now.

Congratulations to the following individuals who claimed a HACC treasure!

Dauphin County: Tiffany Mutzabaugh is a current student at HACC's Harrisburg Campus with a focus on paralegal studies. She found the HACC treasure at the Metro Bank Park under the bushes. 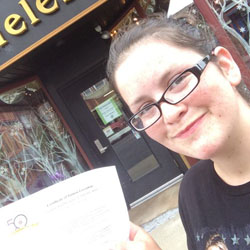 Lebanon County: Jaclinn Wagner is a current student taking classes at the Lebanon and Harrisburg campuses and through HACC's Virtual Learning. She found the HACC treasure at the Timeless Café in Lebanon. 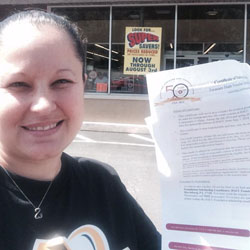 Schuylkill County: Cynthia Deitzler is a current student at the Lancaster Campus, and she is studying nursing. She found the HACC treasure at the Berger's Market and chose to participate because she pays for much of her schooling out of pocket.

Franklin County: Alexander Egner attended HACC in the past, and he was happy with his experience. He found the treasure at the Chambersburg Heritage Center in a vault. 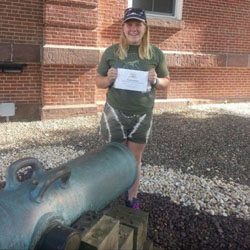 Juniata County: Outside of the Juniata Courthouse in a cannon on the courthouse lawn, the Harrisburg Campus student, Jenna Mock, found the treasure. Jenna is studying biology. She said, "I can use every bit of money I can get to help pay for college. I love HACC. I love the professors and this was a great opportunity. I also have been able to see so many different counties!" 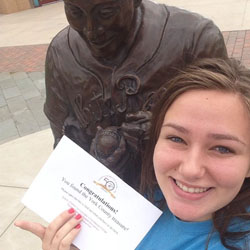 York County: The York County treasure was found by Aimee MacKenzie at York Revolution's Santander Stadium. She found the treasure hidden on the Brooks Robinson statue. She is starting at HACC's York Campus this fall and studying elementary education. She chose HACC because the College offers such great prices for the same exact courses offered at other universities. She stated, "The treasure hunt is awesome. The great price of HACC's courses will go down even more!" 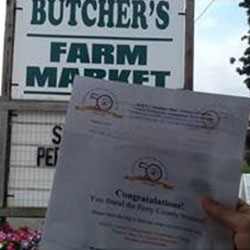 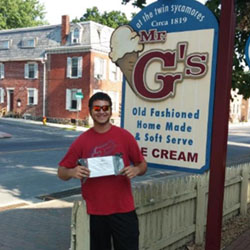 Adams County: Dustin Zeller is starting classes at HACC's York Campus this fall and studying Computer Science. After a few clues, he found the treasure underneath a picnic table at Mr. G's Ice Cream located in Gettysburg. 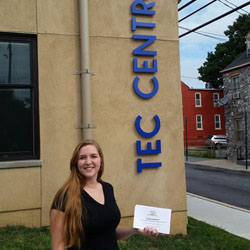 Lancaster County: Miranda Lou Henne found the HACC treasure at Tec Centro. She's studying paralegal studies at the Lancaster Campus. Miranda indicated that she pays for school out of her own pocket so the tuition giveaway helps a lot. 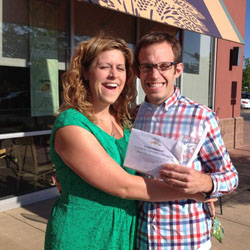 Cumberland County: On the last day, Christopher Fry found the hidden treasure under a chair at the Panera Bread in Mechanicsburg. He is a current student studying Computer Information at the Midtown Trade and Technology Center.