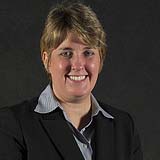 Withrow earned a bachelor's degree in English from the University of Findlay in Findlay, Ohio, in 1992. After spending several years in the workforce, she returned to school and earned a master’s degree in English from Bowling Green State University in Bowling Green, Ohio, in 1997. During graduate school, she was selected as one of the recipients of a competitive graduate assistant program. While teaching for the university during her graduate schooling, she developed a passion for education, particularly education at the college level. This passion combined with her previous work experience in database programming resulted in Withrow's progression from traditional classroom education to the world of online education.